Dharamshala is a city in the Kangra Valley, in the Indian state of Himachal Pradesh. It sits in the shadows of a dense forest of pine and cedar trees, with the most beautiful views of the valley and snow-capped Dhauladhar Mountains. The city is the winter seat of the government of the Indian state and the headquarters of the Kangra district.

Most of the population of 20,000 of Dharamshala is Hindu, making up almost 70%, although there is a more recent prevalent Tibetan Buddhist influence from the exiles who made the journey from Lhasa. It is estimated that between 2,000 and 2,500 Tibetans arrive annually.

Because Dharamshala sits on the slopes, the elevation spans in altitude from as high as 7,700 feet down to around 3,400 feet. The town can be divided into Upper Dharamshala and Lower Dharamshala.

You will find in Upper Dharamshala, the town of McLeod Ganj. It was named after the British Lieutenant-Governor of Punjab, Sir Donald Friell McLeod. Currently, the town serves as the home of the Tibetan Government in exile and the home of the 14th Dalai Lama. 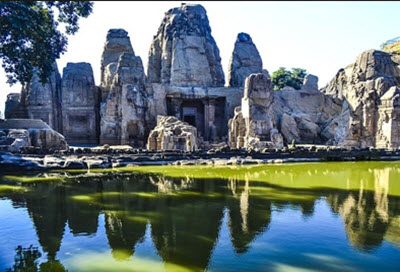 It has served as the home of the Dalai Lama since 1959, when the Chinese took control of Tibet. Since then, Dharamshala has been transformed from a quiet forgotten Indian mountain community to a world-wide Tibetan tourist destination for students of Buddhism as well as hikers and backpackers.

The small urban area of Bhagsu is also in Upper Dharamshala and is a quiet community with schools, shops and restaurants. Dharamkot, next to Bhagsu, is a town where there can be a bit of an escape from the local life and offers excursions into the woodland trails.

Lower Dharamshala is mostly populated with government buildings, schools, and hospitals. Kotwali Bazaar is a popular market spot, but the bulk of the tourism and culture is farther up the slope in McLeod Ganj.

Triund Hill is at the base of the Dhauladhar mountains and is a popular destination for trekkers and hikers. It is known as the crown jewel of Dharamshala, mainly for the level of difficulty for hikers and the views that it offers.

Tsuglagkhang Complex, located in Upper Dharamshala, is the largest Tibetan temple outside Tibet and is the monastery of the Dalai Lama. It is full of thangkas, beautiful murals, statuary and a large meditation hall. It also has Kalachakra Temple, meaning ‘the wheel of time’.

Because of the confluence of the Indian Hindu heritage, the Tibetan Buddhist influence, and the European Christian settlers, there is a conglomeration of sights to see in Dharamshala. The original meaning of Dharamshala means “spiritual dwelling or resting place”. It was named so because it was a stop along the way for many Hindi pilgrims to rest and rejuvenate along the road.

When the British needed a cantonment for the troops, in 1849, they selected the quiet Hindu resthouse for the sight in Kangra. It developed into a village, with a small cathedral built in 1852, which is St. John’s Church in The Wilderness.

There at the cantonment, the 66th Gurkha Light Infantry was also stationed in 1860. This area was convenient for the Hindu soldiers, most of which worshipped at the Shiva temple of Bhagsunag. Later Gurkha infantry divisions became instrumental in World War I and World War II and are remembered in Dharamshala for their heroism in defending India.

Since the Tibetan uprising, The Tibet Government in Exile was officially located in Dharamshala in 1960 and located the Namgyal Monastery. In 1970, The Dalai Lama opened the Library of Tibetan Works and Archives.

The influx of Tibetans has truly revitalized Dharamshala, making it a world tourist destination.