In the valley of the Huang River, the remote city of Xining sits as the capital of Qinghai Province. The Huang River, being a tributary of the Yellow River, helps to make this area a fertile land.

Over thousands of years, Xining has been transformed as part of the Northern Silk Road trade route, from Northern China into the Tibet Autonomous Region, into a bustling industrial, agricultural and religious city.

Xining is located about 125 miles west of Lanzhou in the Gansu Province. It sits 7464 feet above sea level and has a land area of 2846 square miles. There are over 2 million people that live in Xining, with over half of them living in the urban areas. 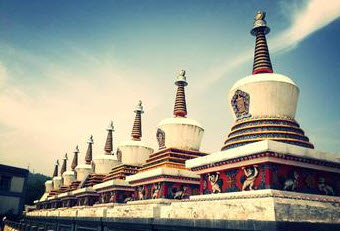 The history of Xining spans over 2000 years. The Han, Sui and Tang Dynasty had early control of Xining, with the Tibetans taking control in 763 A.D, and for hundreds of years it was known to the Chinese as Qingtang Cheng.

When the Song Dynasty took control in 1104, it received its status as “place in the west”, and was named Xining. Around the 16th century, Xining became known as a religious center for the Gelug School of Buddhists, with the establishment of the nearby Kumbum Monastery.

Sadly, the earthquake of 1927 was part of the Xining history. It was one of the deadliest in China’s history, with a recorded magnitude of 7.9 and over 40,000 people perishing. Xining sits on the Indian tectonic plate that converges with the Eurasian plate, making this area prone to a great deal of earthquake activity.

Shortly after the 1927 quake, but not as a result of, Xining was made the new capital of the province of Qinghai in 1928, where it has remained to present day. Another sad moment in Xining history was its involvement in the Second Sino-Japanese War. Unsuccessfully, Japanese bombers targeted the city with air raids, attempting to destroy it.

It was made a municipality in 1945, giving it administrative level status and spurring it on into a modern and industrial powerhouse. Governor Ma Bufang is to be credited with a lot of the progress, ushering in advancements in the educational system, overall clean-up of the city, as well as introducing a sewage system.

Industries like steel, metalworking, leather, and wool have been successful in Xining. The chemical industry is strong, due to the supply of salt from the Qaidam Basin.

Visited yearly by 14 million tourists, Xining is known as China’s summer place. It enjoys cool temperatures due to its higher altitude and semi-arid climate. Xining is on the edge of the Qinghai-Tibetan Plateau, making it a gateway to Tibet with the aid of modern transport by road and rail.

Xining has a rich religious heritage and history, possessing both The Kumbum Monastery, known as being one of the six famous Gelug monasteries, as well as the The Dongguan Mosque, known for being one of the oldest and most famous Islamic mosques in China.

The Kumbum, in particular is one of the most important Buddhist temples. The name means “100,000 enlightening bodies of the Buddha”, from the images of Buddha reportedly found on its sacred, holy sandalwood tree. The sandalwood tree was named “The Tree Of Great Merit” because it was believed to have grown where Tsongkhapa was born, the founder of Gelug Buddhism.

Xining is China’s visionary city in the development of the New Silk Road, connecting millions of people to Southern and Central Asia, as well as Europe. China plans on using high speed express railways, with a network of highways to utilize Xining as a crossroads and to aid in positioning China as a new trade center of the world.