At an elevation of 11,450 feet above sea level, Lhasa sits in a valley in the Tibet Autonomous Region (TAR) in the People’s Republic of China (PRC). It has been referred to as “the roof of the world”. Lhasa is a prefecture level city, which gives it an elevated status among cities in the TAR.

The Tibet Autonomous Region in Central Asia occupies a considerable amount of land, boasting an impressive terrain. Among the valleys, mountains and plateaus of the TAR sits the glorious Mt. Everest, the highest mountain on earth in the Himalayan Mountain Range.

Although there is much to see in Lhasa in the way of cultural and tourist attractions, many visitors arrive for the sole purpose of taking the several day long trek to Everest Base Camp. The distance from Lhasa to Mt. Everest is just slightly over 280 miles.

Since the mid 17th century, Lhasa has been the administrative capital city of Tibet, bordered by the Qinghai, Sichuan, and Yunnan Chinese provinces. To the south, sits Nepal, Bhutan, Myanmar and India. The Lhasa River, a northern tributary of the Yarlung Tsangpo River, flows through the region helping to sustain agriculture, despite its propensity for flooding during monsoon season. 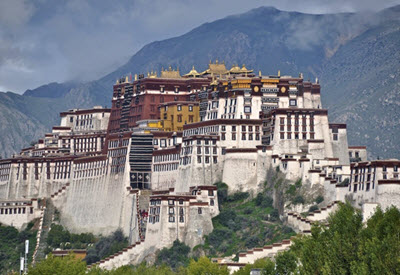 To the northwest of Lhasa sits Holy Mount Nyenchen Khangsar and is the highest mountain near Lhasa. It is considered to be holy because it is named after Nyenchen Tanglha, one of the most important deities in northern Tibet and is the main focus of much Tibetan folklore.

The Jokhang Temple in Barkhor Square is one of the sights that many of the visitors to Lhasa see as a part of a Buddhist pilgrimage of sorts. It is considered by them to be the most holy temple. Tradition teaches that Songtsen Gampo of the Tsang Dynasty and the 33rd king of Tibet, built the temple for his two brides in 647 A.D.

Potala Palace was the former residence of the 14th Dalai Lama, who was forced in exile in India while the remaining Tibetans fell under Communist China. National Uprising Day is remembered by Tibetans, when they stood toe to toe to protect their freedom and autonomy on March 10, 1959.

West of the Potala Palace is Norbulingka, also a palace with surrounding gardens. “Jeweled Garden” is the meaning of Norbulingka and it really dazzles during the summer festival of Sho Dun usually given in August. After a month of quiet seclusion by the monks, where they retreat inside their monasteries to keep from stepping on the insects, dancing, eating, and laughing floods the gardens.

Interestingly, the popular dog breed Lhasa Apso or Lhasa Terrier came from the city of Lhasa. Apso means “bearded”, so Lhasa Apso means literally “long-haired Lhasa dog”. This dog breed was originally bred for the monastic purposes of alerting the monks to intruders. Its sentinel and sometimes aggressive qualities, along with its excellent hearing, made it a natural guard dog.

Lhasa is considered to be home to mystics and saints and has been said to preserve ancient wisdom. More affectionately known as “the forbidden city”, Lhasa has been viewed by Buddhists as an enchanted place where great spiritual treasure is found.