Where the Yarlung Tsangpo and Sangchu Rivers converge, the city of Shigatse can be found and is called “the fertile land”. In the Tibet Autonomous Region, it is a prefecture level municipality, ranking just below a province in the People’s Republic of China.

The traditional capital of the Tsang China province, Shigatse is a bustling city full of commerce, culture and tourism. With a population of just over 100,000, Shigatse covers over 1,411 square miles of land. It sits on a plain at 12,600 feet above sea level and about 186 miles from Mt. Everest.

Although tours from Shigatse to Mt. Everest are a popular draw to the city, the monasteries are seen to be the real attraction to many visitors. The Shigatse Dzong sits on a hill overlooking the town, resembling Potala Palace.

Upon the installation of Ngawang Lobsang Gyatso in 1642, which was the Fifth Dalai Lama, the Shigatse Dzong was where the very first temporal and spiritual leader ruled. Shigatse Dzong was rebuilt to smaller scale in 2007 in the same location, after the original palace was destroyed in 1961.

One stone at a time, the temple was disassembled after the Tibetan uprising in 1959. This was due to the Chinese involvement in Tibet and the resulting Cultural Revolution. Later, with donations from Shanghai, the temple was reconstructed with modern materials by referring to old photographs. It now sits empty.

Tashilhunpo Monastery is home to the largest gilded statue in the world. It took 9 years and 900 craftspeople to make, using gold, copper and numerous precious stones. It is located within the monastery in The Maitreya Chapel, spanning over 80 feet in height.

Tashilhunpo was built in 1447 by the 1st Dalai Lama and was the traditional home of the Panchen Lama, the second most important religious figure in Buddhism next to the Dalai Lama.

It is important to note that enshrined within Tashilhunpo is Gendun Drupa, the First Dalai Lama and the only Dalai Lama not to be entombed in Lhasa. He was also the founder of the monastery and a disciple of Tsongkhapa, who founded the popular Tibetan school of Buddhism known to be Gelugpa. 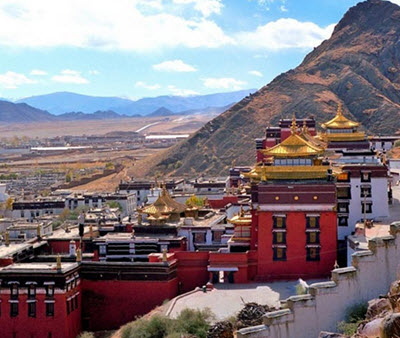 The Panchen Lama’s Palace is also within Tashilhunpo, but remains closed to the public. The Fourth Panchen Lama, the teacher of the Fifth Dalai Lama, is buried in his grand Stupa-tomb east of the Palace. It was built in 1662 and was the first stupa-tomb there.

The Kelsang Temple is one of the oldest buildings with the Main Chanting Hall, where Lamas learn the sutras. Lamas can be seen practicing their teachings and debating with one another in the Great Courtyard of the Kelsang Temple.

Most of the pilgrims visiting the city will make their way to the outer Kora around Tashilhunpo to circumambulate the monastery. They can be found meditating and periodically lying prostrate on the path.

The Shigatse society and culture emanates mostly from its Tibetan Buddhist religion and has had very little outside influence. With 97% of its population being Tibetan and with a history of 600 years of Buddhism, Shigatse is steeped in traditions, rituals and customs.

For visitors, Shigatse offers much in the way of cultural stimulation, fabulous art, statuary, history and hospitality.