China invaded Tibet in 1950 and since then their occupation has been very devastating to the Tibetans. The forced exile of their religious leader, the Dalai Lama, and the inhumane treatment meted out to them by the Chinese military to ensure some form of compliance has compounded the situation. The Buddhist religion is being suppressed by the Chinese regime as the communist ideologies are forced on the Tibetans. It has been over 40 years since the invasion and Tibetans are still hopeful of reform. They continue to stand their ground with peaceful demonstrations based on their Buddhist religious teachings.

China’s Stance on the Occupation of Tibet

China has maintained that Tibet has been under their ownership for over 800 years. Their qualification is a treaty called the Simla Convention which was signed by Tibet and China in 1909. This treaty came about because of Britain’s invasion of Tibet for political reasons pertaining to the suspected possible influence of Russia on Tibet. China intervened during the British invasion, hence the treaty giving China limited control over Inner Tibet. China invaded Tibet in 1918 for full control, but was unsuccessful. 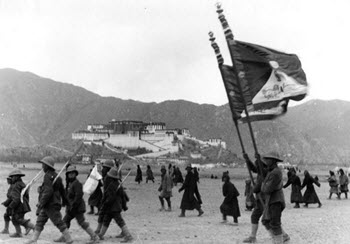 The invasion in 1949 -1950 saw China abolishing the serfdom feudal system, which the Tibetans saw as illegal as they were already an autonomous state fully in charge of their democracy. With China’s foothold in Tibet, the Chinese invaded with over 40,000 troops and forced the Tibetan Government to sign a Seventeen Point Agreement where China would be sole ruler of Tibet. The Agreement also promised to protect Tibet’s political sovereignty as well as their Buddhist religious practices. Based on many reports, this autonomy has never been realized for Tibet.

China maintains Tibet has full autonomy as the Tibet Autonomous Region of the Peoples Republic of China or the PRC. This is just a part of Tibet and the remaining lands are totally controlled by China. China claims they have brought prosperity to Tibet and improved the economic standards and the standard of living of the people. They have brought education to a higher level – from 5% to 85%, and have also improved the medical standards. Social well-being is also on the rise as the Tibetan culture is made fuller and richer by China’s cultural diversity.

Infrastructure improvements are another claim by China, as they have built better homes and roads, which were not there before. The reality is the Chinese have methodically destroyed the many monasteries as well as destroyed homes of families in order to have control. They have removed people from their lands and cause them to be dependent on the state for their livelihood. Poverty is rampant in Tibet. Jobs are scarce for Tibetans as the many jobs are given to Chinese migrants and contractors. The natural resources are mined and used to enhance China’s economy leaving Tibetans to scrounge for a living.

Tibetans believe in peaceful means to gain their independence. They have engaged in many peaceful marches since China’s occupation, and have been persecuted for it. There have been over 100 suicides by fire, which has many international governments cause for concern and they have implored China to rethink their stance on Tibet, but to no avail. China still maintains they have sovereign rights and control of Tibet.

Musicians who write and sing ballads against the government are thrown in prison for years at a time; some are never heard of again. It is notable that persons are thrown in jail for known support of the Dalai Lama, who is the legal governing entity of Tibet since his appointment in 1959.